Ohio Is Such a Mess

"On the road above the Bell Company's dock, Pennsylvania Route 68 invisibly changes to Ohio Route 38, and trees half hide some signs by the roadside.  The place could hardly be more anonymous.  Even someone familiar with the historical significance of this particular spot, who has traveled several thousand miles to find it, and whose eyes are flickering wildly from the narrow blacktop to the grassy verge between the road and river, can drive a couple of hundred yards past it before hitting the brakes.


The language of the signs is equally undemonstrative.  A stone marker carries a plaque headed "The Point of Beginning" that reads "1112 feet south of this spot was the point of beginning for surveying the public lands of the United States.  There on September 30th, 1785, Thomas Hutchins, first Geographer of the United States, began the Geographer's Line of the Seven Ranges."


There is nothing to suggest that it was here that the United States began to take physical shape, nothing to indicate that from here a grid was laid out across the land that would stretch west to the Pacific Ocean, and north to Canada, and south to the Mexican border, and would cover more than three million square miles, and would create a structure of land ownership unique in history..."


In his wonderful book 'Measuring America', author Andro Linklater explains in detail just how it is that the concept of property ownership, and in particular the ownership of land, is the cornerstone of the American republic.  America was founded on the concept of property rights, and there is no greater realization of that concept than the idea that the common man can buy, hold and own land and that he, his family and his descendants will prosper and profit from the ownership and improvement of land.  The land does not belong to a government or a sovereign, but to the people.  It was a radical concept in 1776 and it is still very much a unique concept in the world today.

The Treaty of Paris that ended the Revolutionary War gave the new American nation control of a large tract of land west of the Ohio River in what is today southeastern Ohio.  This was really the only tangible asset the federal government owned that was not already claimed by one of the 13 states.  Almost in desperation, the Congress of the Confederation  hit on the idea of land sales as a way to support the struggling federal government.  The idea was simple - divide up the land and sell it for a dollar an acre.  Cash only, no credit!

But how to divide it?  This new nation needed a land measurement and inventory system that was logical, easy to implement and resulted in land parcels that could be easily and quickly sold.  The resulting system, codified in the Land Ordinance of 1785, gave us what we know today as the township and range land survey system.  Conceptually is was simple - divide the land into six miles square sections (townships), then subdivide each township into one mile square sections, then further into quarter sections.  The initial unit of sale was a quarter section of 640 acres.

But where to start?  The Congress of the Confederation set up a committee to study the issue and appointed Thomas Hutchins, a noted military engineer and surveyor, as Geographer of the United States.  It was decided to start the land survey at the point where Pennsylvania's northwestern boundary intersects the Ohio River.  This point became the Point of Beginning for all public land surveys in the United States.

So, on a blustery day in late September, 1785, Thomas Hutchins and his survey party walked down to the banks of the Ohio River, drove a stake in the ground, set their survey instruments up and began to lay out what became known as the Seven Ranges region of Ohio. 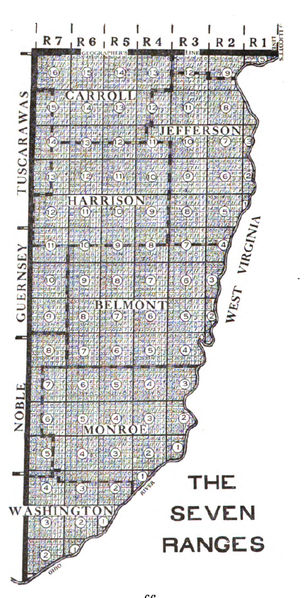 From this Point of Beginning Thomas Hutchins set in place the land survey system that would ultimately encompass 75% of the land mass of the United States, clearly establish and define private land ownership and set the stage for the explosive westward expansion of the US in the 19th century.  On September 30th, 1785 Thomas Hutchins literally drove the stake that established the geographic fabric upon which the United States was built.


View Larger Map
Ohio was to be the proving grounds for the township and range survey system.  Like a lot of first tries at anything problems cropped up, adjustments were made and shortcuts were taken.  Part of the problem stemmed from the fact that much of the land in what we today call Ohio was subject to prior claim.  Large areas of  northern Ohio were ceded to Native Americans under various treaties.  Connecticut claimed a large region stretching from present day Sandusky, Ohio east to the Pennsylvania border.  Virginia claimed a large tract in the south to use to compensate her veterans.  Other bits and pieces here and there were set aside.  Ohio was a patchwork quilt of land claims, set-asides, treaty lands and private holdings.


But very quickly another series of problems popped up.  Congress was pressured by speculators to sell large chunks of land.  Congress saw this as a way to generate quick cash - sell land at a slight discount for immediate payment and let the speculators carry the cost of the land surveys.  The land speculators saw it as a road to riches - if they could sell fast.  But before any land could be sold it had to be surveyed and the surveys registered.  That meant the surveys needed to be done fast.  Accuracy be damned!

In the 18th century anyone with rudimentary math skills and who could afford a surveyor's compass and chain could call themselves a surveyor, and many did.  Since surveyors at the time were paid by the mile the faster they worked the more they got paid.  This meant the surveys were sloppy and niceties like calculating the local differences between true north and magnetic north were either not done as often as required or simply not done at all.

As a result, a lot of Ohio's township and range section lines take off at odd angles and don't quite form square parcels.  Eventually the errors accumulated and corrections had to be made.  Often it was the simple expedient of offsetting a north-south range line at the start of the next township line.  Since roads in Ohio tended to follow the township and range section boundaries this led to the quirky (and often dangerous) tendency of country roads ending at a T-intersections for no apparent reason, then picking up again about 100 feet east or west of the end point.  These little jogs are a modern reflection of the corrections the surveyors were forced to build into their work over 200 years ago.

Other times the errors were so extreme that there was really no way to correct them and the government was just forced to incorporate the errors into the public record as-is:


So there you have it.  Ohio is a darned mess.  But a fascinating mess that leaves us the physical traces of the birth of the survey system that made westward expansion possible.

Email ThisBlogThis!Share to TwitterShare to FacebookShare to Pinterest
Labels: survey