Why, it's the Sesquicentennial International Exposition!

The exposition was a bust, going bankrupt in 1927.  But at least one Federal government agency got in on the celebration.  The General Land Office of the Department of the Interior issued this neat postcard: 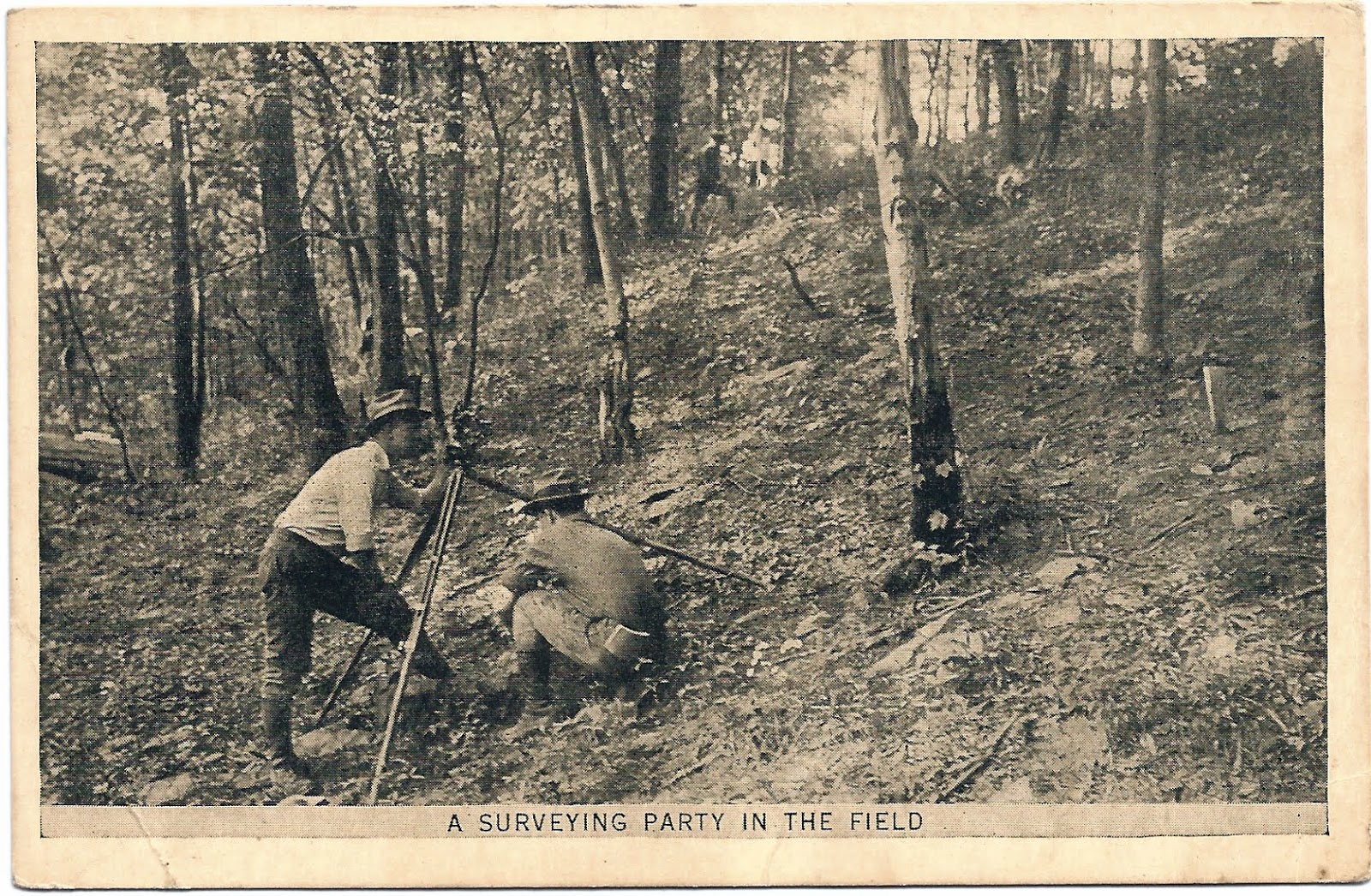 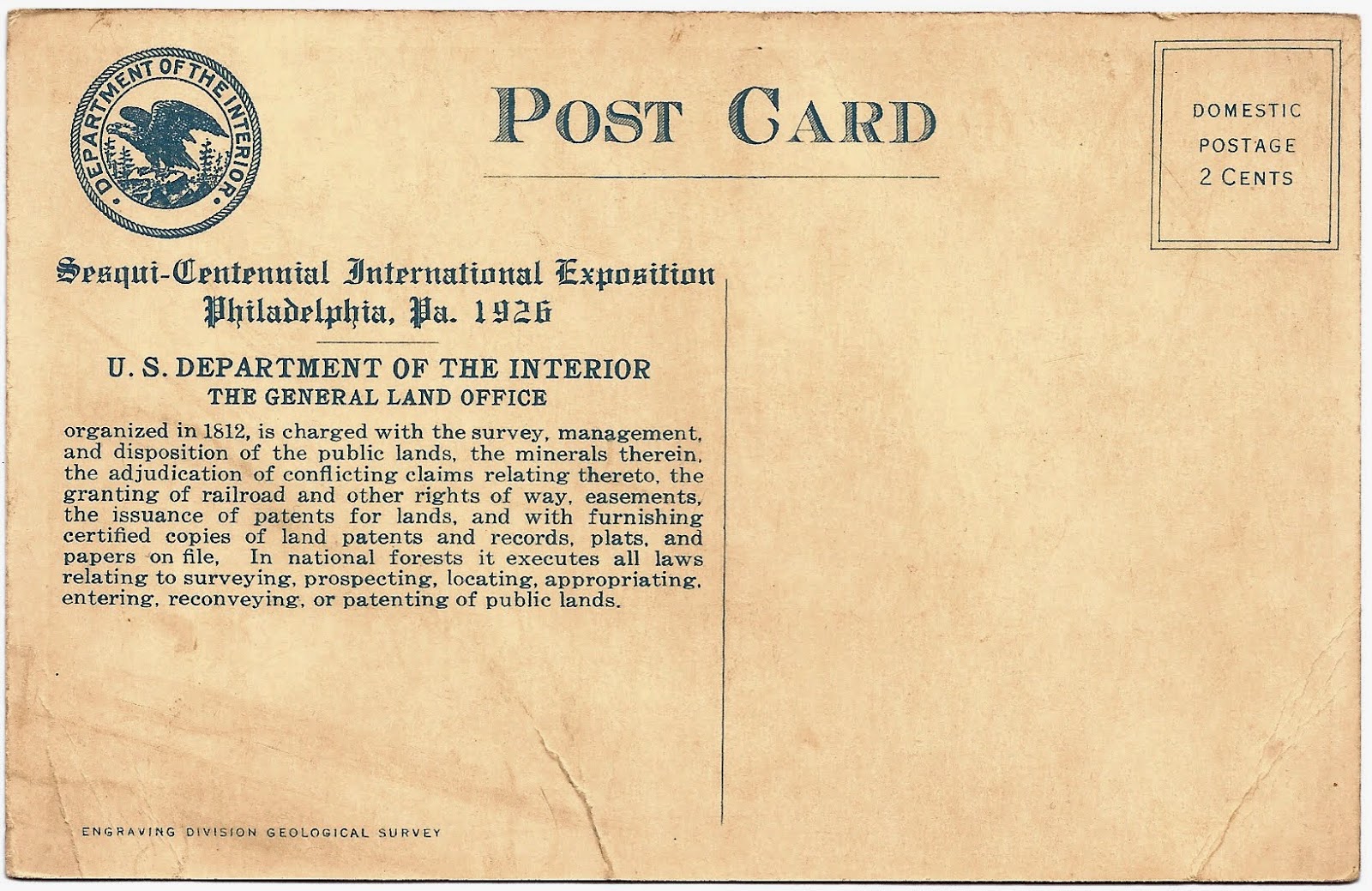 I'm guessing the General Land Office had an exhibit in the 'U.S. Gov - Transportation, Machinery, Mines & Metallurgy' exhibit space near the south side of the exposition.

What was the General Land Office (GLO) and what did it do?  The GLO was formed in 1812 with the mission of selling federal lands to private individuals.  But the GLO was more than just a sales agency.  They first had to survey and subdivide federal lands into logical and easy to identify and register parcels.  Using the township & range system first used in 1785 by Thomas Hutchins to lay out the Seven Ranges area of eastern Ohio, the GLO conducted the largest land survey program in history, surveying, registering and selling billions of acres of public land stretching from the Ohio border to Washington State.

In 1946 the GLO was merged with other Department of the Interior agencies to for the Bureau of Land Management.  The BLM still conducts extensive land surveys, but certainly nothing like what took place during the heyday of the General Land Office in the late 1800s.

By the way, the popular saying 'land office business', which that indicates a flurry of business activity ("He's doing a land-office business!"), popped up in the mid-1800s and refers to the often frenetic activity that surrounded local GLO offices as settlers scrambled to register and pay for their land claims.  Selling land was a booming business in the 1800's, and nobody sold more of it than the GLO!

Who was David E. Twiggs?  Twiggs was a son of Georgia, born in Richmond County, and a veteran of the Mexican-American War, the Seminole War and the Blackhawk War.  In 1861 he was serving as a brevet Major General in the US Army and in command of the Army's Department of Texas.  On 18 February 1861 Twiggs surrendered his entire command to the Confederates.  This included all military stores kept in the sanctuary of the old mission church in San Antonio - the Alamo.

A talented topographer and lieutenant colonel named Robert E. Lee happened to be part of Twigg's command and was in San Antonio at the time of the surrender.  He is reported to have said, "So it has come so quickly to this?"

In fairness it looks like Twiggs repeatedly asked for guidance from the War Department as to what actions he should take if Texas seceded from the Union, but got no reply from his superior, General Winfield Scott.  Key Federal strongpoints and depots in Texas had been besieged by Confederate militias and Twigg's forces were badly out-numbered at all locations.  General Twiggs apparently felt he had little choice but to negotiate an honorable surrender  He insisted on fair terms for the Union soldiers in his command.  They were afforded safe passage out of Texas and were allowed to retain their personal arms and unit colors.

Twiggs, a long serving soldier of great distinction, was apparently devastated by his dismissal from the US Army.  It's not hard to imagine the shame he felt at seeing the notice of his dismissal published in the War Department's General Orders for March 1st, 1861.  Although over 70 at the time, he accepted a commission as a major general in the Confederate Army.  But his military career was effectively over.  He died in Augusta, Georgia in the summer of 1862.
Posted by Brian at 06:00 No comments: